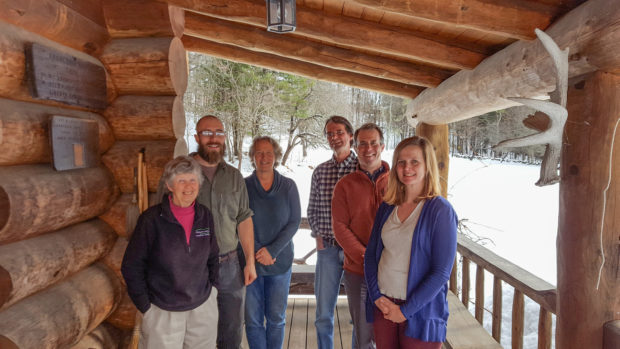 2020 Waterman Fund Board of Directors Growing up in Massachusetts, Lars took frequent family hiking trips as he climbed all of the New England 4,000 footers. After both working in the AMC’s hut system in the White Mountains in the 80’s, he and his wife, Jennifer, moved to Vermont. He immediately adopted the alpine portion of the Sunset Ridge Trail on Mount Mansfield. He received a Masters Degree in Natural Resources Planning from UVM, including a summer collecting visitor use data at Acadia National Park, and an internship with the Adirondack Nature Conservancy supporting the Summit Steward program. Lars became the Green Mountain Club’s Director of Field Programs in 1992. His time with the Club included production of a regional newsletter focused on the alpine zone, entitled Prenanthes, and hosting the first regional alpine stewardship gathering. He also had a six month stint as Interim Executive Director. Upon leaving GMC in 1999, Lars became Executive Director of Keeping Track, a regional organization devoted to wildlife conservation planning and education. In 2004, another passion took hold and he changed careers to education, and he now works at the Burke (VT) Town School. He did not leave his career in natural resources behind, as he has taught third and fourth graders about forest ecology and Vermonters’ interaction with the land. Lars served as chairperson of the Bolton (VT) Conservation Commission and over ten years led efforts to protect and manage the town’s 400 acre Preston Pond Conservation Area. He currently serves on the board of directors of the Green Mountain Club and he and Jennifer live in Vermont’s Northeast Kingdom. Brendan is a Senior Research Scientist at the Paul Smith’s College Adirondack Watershed Institute located in the northeastern Adirondacks, where he studies lakes from around the world. He also runs a professional landscape and nature photography business dedicated to connecting people with the natural world. He worked as a Summit Guide on Poke-O-Moonshine from 2004 to 2005 and as an Adirondack High Peaks Summit Steward from 2006 to 2008. He continues to volunteer his time and talents as a photographer to the benefit of the High Peaks Summit Stewardship Program. In his free time Brendan can be found exploring the Adirondacks by foot, ski, or boat. Nancy Ritger has devoted her career to promoting an understanding of mountain ecosystems.  As an interpretive naturalist, guide, and program manager for Appalachian Mountain Club she focuses on educating outdoor enthusiasts of all ages. Through her works she instructs courses on alpine and boreal forest ecology, provides interpretive skill development, manages volunteers, and creates activity books for the Junior Naturalist Program in an effort to cultivate strong connections between individuals and the natural world. In her free time she can be found hiking, biking, or skiing in Crawford Notch where she resides with her husband, Mark and family in the White Mountains.  Nancy is proud to be the 2015 recipient of the Guy Waterman Alpine Stewardship Award. Will Kemeza teaches in the experiential “Rivers and Revolutions” program in Concord MA. He has worked for conservation organizations across New England, including the Appalachian Mountain Club, the Green Mountain Club, and the Randolph Mountain Club. Will’s academic background includes a Master of Divinity degree from Harvard Divinity School, where he studied the intersection of religion and ecology. He lives in Harvard MA with his wife, Charlotte, two sons, Liam and Kai, and lots of animals. Will is an avid (and slow) rail runner, who goes hiking whenever he can. Alicia is the Director of Development & Communications at the Green Mountain Club where she works to raise funds to maintain and protect the Long Trail while employing communications strategies to elevate the importance of this work and providing opportunities for individuals to connect with the trail. She has previously worked in development at Spectrum Youth & Family Services and various environmental education non-profits in Massachusetts. Alicia lives in Vermont with her family and in her free time you can find her exploring the Green Mountains by foot or ski. Ryan J. Harvey is a licensed professional forester, land manager, and trails consultant. He has worked various backcountry stewardship positions in the White Mountains, Adirondacks, and Berkshires, including nine years serving in the Pemigewasset District of the White Mountain National Forest. Now working as a forester, he oversees land management of both private and public lands. As a trail consultant he continues to work with New Hampshire towns and residents to build and maintain recreational trails. Ryan also serves as the Chair of the Dorchester Conservation Commission, and as a board member of Rumney Ecological Systems/Pemi-Baker Land Trust. He resides with his partner, Bethann Weick, and their dog, Mica, in Dorchester, New Hampshire, where they homestead 28 acres along the South Branch of the Asquamchumauke River. Sean worked as an Adirondack High Peaks Summit Steward in 1999 and 2000. He received his M.S. at SUNY-ESF and his Ph.D. at the University at Albany, specializing in bryology (the study of mosses, liverworts, and hornworts). In 2010, he joined the Biology Department at SUNY Oneonta. He teaches courses in Botany including Bryology, Vascular Plant Systematics, and Dendrology. His research is focused on understanding how mode of reproduction in plants, particularly bryophytes, affects colonization of new habitats, range expansions, and gene flow within and between island populations. The alpine summits of northeastern North America have been the primary site for his work. Sean also conducts research focused on vegetation dynamics in the Adirondack alpine. Laura was married to Guy for nearly 30 years. They undertook the trail maintenance and stewardship of the Franconia Ridge in New Hampshire’s White Mountains in 1980. It was through this work of nearly two decades that they formed a close attachment to the Alpine areas of the Northeast, which became central in their lives and in their writing. The books they wrote together on the mountain history and environmental issues of the Northeast include Backwood Ethics and Wilderness Ethics. Laura now resides in East Corinth, Vermont.

Visit Laura’s website to learn more about her work.

View past board members.